Live To Eat: What River Guides are Really Made Of

If you've been on the Middle Fork of the Salmon with ECHO, you may have met Trey. Trey and his granddad Big come on a Middle Fork trip with us every year. Trey is what we call an ECHO guide in training. He has almost all of the key components of being a fantastic future river guide: He’s an athlete (track and football), he’s musical (taking guitar lessons), and at the ripe age of 14 he can totally hang in the wilderness with a bunch of us geezers for a week without any kids or electronics to entertain him. Trey, to say the very least, is one rad and unique young dude, however, he has one major issue, and it’s a big one; food.

Trey with an appetizer tray

Trey is a "eat to live" kind of guy, but being a river guide requires a "live to eat" kind of mentality. One year, our manager Zach, who is equally as ruthless as I am, challenged Trey to eat two cheeseburgers in exchange for a free ECHO trip. Trey took on the challenge and won (which is why I have great faith in his future) - but the fact that Zach was willing to make this wager only furthers my point. When you row big boats in the sun for 20+ miles a day, followed by rigging and unrigging gear, topping it off with a side hike - you need to like food, and you need to like it a lot. Not only do you have to like it, but you have to be able to cook it, with style, for 30 people, in the wilderness.

Trey rowing a boat on the Middle Fork

So this year, we put Trey on the cook crew for our final night. I can’t say he was a willing participant, in fact, I may or may not have forced him to do it. But seeing as it was Trey, he joined us with a smile on while I taught him about chopping roasted root vegetables, grilling pork, and making a cobbler all at the same time. I did this all while aggressively asking him about life as a 14 year old (I’m brutal). We let Trey leave the line so he could prepare to eat his dinner, at which time I coached him on why he should eat more (he never really got a break), but I have faith that with a few more years of age, and a few more Middle Fork trips, we will make a live to eat out of this future river guide. 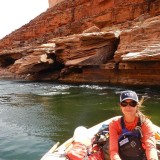 Treesh has been working for ECHO since 2010. When she's not rowing a boat, you can find her climbing, playing guitar, cooking, or writing in Truckee, CA.