I woke up early. There was no rain. I climbed out of my tiny tent into a beautiful Siberian morning. Low clouds hung just above the firs on the other side of the river. Several horses with foals were quietly grazing just behind our camp. I walked down an unbelievably green slope to the river. Yes, probably Tolya was right yesterday, when he told me that the Chuya had a flood in 1961 that people do not remember. Usually, the very simple class III “Burevestnik” rapid was looking pretty violent. At least I definitely did not want to be in the center of the river. Muddy water covered the rocks and formed multiple big holes for about 100 ft. I went back with buckets of muddy water for the kitchen and together with Tanya began to work on our breakfast.

Our small international group – 3 Americans and 3 Russians had arrived here last night. We built our camp under strong rain and only now people could take a look at the Chuya Valley and the river. The Chuya runs from Mongolia, cutting through the range, and forms the incredibly challenging Mazhoy canyon with about 40 Class V-VI rapids. We began our commercial ECHO trip just downstream from this canyon. Even though the road runs pretty close to the river, we did not feel its presence, the Chuya forms a wide valley with spectacular views of the surrounding ranges. Easy access and challenging rapids made this river very popular among Russian rafters.

Typical Campsite for our Siberia Expedition

Every year since the '70s hundreds of rafters and kayakers came to the Chuya for the famous Chuya rally – a competition that, with the help of Misha Kolchevnikov, gave birth to the World Cup in Rafting in 1989. Misha sadly perished on the Katun’ River in 2005 but his name will always be connected with the Chuya Rally.

We ran about 70km (44 miles) of the most popular section of the river. The average gradient of this section is about 6m/km (about 32ft/mi). Considering the volume of the Chuya (my estimation is close to 10,000cfs) it is not a small gradient. The Chuya valley forms a series of flat shelves, which step-by-step ascend above the river. The road – Chuyskiy Trakt - runs on the highest shelf of the right bank. The left bank is mostly covered with fir forest.

Our group planned to run this high water on two boats, with me guiding a 13ft raft with two Americans and two Russians. Tolya, a very good kayaker, provided kayak support for us. Of course, it is not ideal for such high water but we just planned to be very careful.

We got onto the water about midday. I took my crew to take a quick look at “Burevestnik”. We clearly had to be very close to the right bank. The raft slowly entered the rapid. We had not reached any of drops yet when I suddenly realized that Ro - my right front paddler - was swimming! We were right at the entrance and her swim could potentially ruin our run. But the crew did a superb job, and in a second Ro was back in the raft.

Vlad and crew on the Chuya River

From this moment everything was perfect. We ran the rapid, then a bunch of small riffles followed as we quietly floated to the “Begemot” (Hippo) rapid – one of the strongest on the Chuya. A couple minutes was enough to realize that this class V rapid was not for us. A waterfall drop under the broken bridge with a mess of huge holes and waves downstream were too much for our small raft with only a kayak to provide a safety net. We decided to portage it. Maybe next time... We received complete compensation on the next two very long rapids: “Classic” and “Slalom”. Usually not challenging, these class III rapids at very high water became super exciting class IV. "Slalom" between huge holes and rocks took almost an hour. This section made my day. The crew did an outstanding job and Tolya was showing a thumbs up to us in rare pools between the holes.

The next day we ran pretty simple (but still very exciting due to high water) rapids. The river practically did not have slow, quiet stretches. We built camp on a low flat shelf and took time to visit a petroglyphs site nearby. Petroglyphs were great but the local Altaian guide was a bit weird. He mixed the petroglyph stories with his own moral statements, which did not go well with the views of my American nor my Russian friends.

Our last day on the Chuya, we began by scouting a class V rapid “Turbine”. It looked OK to me but the rest of the crew decided not to take a chance, and I let the boat go through the rapid without people. Tolya successfully ran the “Turbine” and recovered our raft below it. Immediately after “Turbine” we ran another class V – the “Tourist Club Horizon” rapid. This rapid is located in a narrow rocky canyon, which turns at a right angle to the left.

The river steeply rushes down, forming big waves and holes and then presses into the wall. We entered the canyon and passed a couple of holes. One of them bounced us and we took the biggest hole much more to the right than I was planning. It hit us hard and I was almost knocked out. Somebody’s back saved me – I kissed it and bounced back to the stern. Now we did not have any chances to avoid the wall. I decided to go right into the eddy and to attempt to ferry the current. Unfortunately, it did not work. The river nicely brought us under the wall where a huge pillow washed over us, scared, but safe and out.

In less than an hour we left the Chuya and entered the Katun’. There is no road along this part of the Katun’ and Tolya traded his kayak for a gear raft. We found a great camping spot – sandy beach surrounded with rocks, with beautiful view of Katun’. Like always, we cooked something about 75% Russia and 25% American.

Tolya is an outstanding cook with only one deficiency. Like many Russians he puts much more than we need on the table. For example: we cooked chicken with potato, salad, and fried eggplant, but Tolya would also add one of the wonderful Russian soups. Of course people can’t eat all of this, and we were throwing away even more food than we do on our commercial trips in Idaho. Like all Russians (including myself), Tolya is stubborn: he is listening to me and nods but next morning he does the same stuff. Even with my failure to stop him, we brought back about a third of the food to Barnaul. However, to be honest, the food was outstanding. Russian pancakes are arguably the best in the world. Bill found his niche in soups (Tolya’s “solyanka” does not have competitors!). We even cooked real Uzbek plov (pilaf), which is not easy to make in a trip.

Our American and Russian halves mixed really well. It was fun to watch Ro and Tanya talking with each other nonstop, despite the fact that each of them knew very few words in the other's language. Somehow they were able to learn and their language progress was huge considering one week long time frame. At every campsite, Bill gave our Russian teammates a great example on how to keep the river clean. He walked around and collected trash left by Russian rafting groups. Russia is still in an infant state in this area. Many great sites are loaded with rusty cans, some broken glass, and multiple campfire pits. Russians definitely could learn from Americans about how to keep their beautiful rivers clean. It is not easy to explain this necessity, as I mentioned before, they are stubborn and do not like when somebody (especially Americans) teach them. But our efforts to keep the camps clean are a very good example for them.

Sunset on the Katun' River

The Katun’ river has a large volume – on our section it is about 25,000 cfs. It is fast and forms huge smooth waves everywhere, even in pools. In our second day on the Katun’ we ran two very big rapids – “Il’gumen’” and “Shabash”. Both of them are long and have incredibly big waves. Shabash also has huge holes that one must avoid. We did not have any problems in Il’gumen’ but in Shabash’s second half, our tiny raft came close to flipping. Our last camp on the river was a nice spot with a kind of collection of “souvenirs” from different groups of rafters. We built a traditional Russian river sauna and washed out everything accumulated on our skin and minds during the trip.

The next day we passed Putin’s Dacha erected on the Katun’ bank. It was empty, with only one guard standing under a strong rain, who watched us pass by. Very soon after we finished our run, and in the morning Tolya drove us to Novosibirsk, where we took a train to Irkutsk and on to Lake Baikal. But that is another story....

Vladimir at home in Siberia 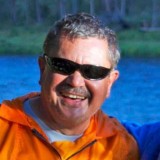 Vlad is a legendary ECHO guide who came to the United States in 1991 after years of leading expeditions in the former Soviet Union. He leads our annual rafting expeditions to Siberia.