Starting 2012 Off Right on The West Fork of the Hood

I'm not one who's big on New Year's resolutions, but this year, maybe because I just turned 30, I decided to think about some of my goals for 2012. Turns out it's a pretty short list. It involves some far-reaching and longtime dreams like learning Spanish, buying a horse, and riding across Patagonia with my fly rod on my back, but it also involves something as equally important to my true sense happiness—spending more time outdoors with new and old friends, particularly on rivers.

The thing I love most about running rivers is the people. People who can step outside of their comfort zone and let the power of water running downhill propel them through canyons with smiling faces and senses of adventure make me want to live better. The thing I love second most is, of course, rivers themselves—the shape, the sounds, the feelings of water cutting across the Earth. Put me on a river and I will be content to explore, to experience, to admire, and to learn for a lifetime.

It is almost impossible for me not to be drawn like a man first in love to a new river. Some of these river relationships are brief and some, like the Middle Fork of the Salmon, I’ll come back to my whole life, but all of them are magic that first time. So then, maybe my goal this year isn’t to just run new rivers and chase fish across the world, maybe my goal is simply to be surrounded by magic as much as possible.

New Year’s Day I got up early and drove from Portland to Hood River in search of a little magic. I met up with Maggie, Hata, Billy, and Jenni who had spent New Year’s Eve on the snows of Mt. Hood. These superstars, along with legendary guides Zach and JR helped me start 2012 off right with a float down the West Fork of the Hood River in Oregon.

Put In for the West Fork of the Hood River

The weather was clear and mild, but there was snow on the ground. We dressed in our winter boating gear and headed to the put in at Lake Branch. We were happy to run into a handful of boaters who had also decided to get out and go for it on the first day of the year. Hata, Maggie, Billy, Jenni, and I paddled a brand new SOTAR raft that Zach custom designed for Columbia Gorge whitewater. She’s called "4x4" and, with Hata on the stick, she drove like a dream. Zach and JR kayaked, splatting every rock they could find with huge grins on their faces.

Zach calls The West Fork the best class IV run in the Columbia Gorge. He might be right when you take into account tons of fun whitewater drops, waterfalls falling from above our heads into the river in all directions, a couple basalt gorges squeezing the river and rising high above our heads, and the easy accessibility (The West Fork is pretty much in ECHO Headquarters’ back yard). It is a truly stunning run.

Beautiful Scenery and Clear Water on the West Fork

The West Fork drains off of Mt. Hood, originating in the same snow that some of the group had skied under fireworks just the night before. Talk about magic. The 5.5 mile run starts where the Lake Branch enters the West Fork and finishes just above Punch Bowl Falls. You have to work a little bit for this one since the take out at Punch Bowl is steep (a good reason to volunteer to drive shuttle while the rest of the group works it out). The run also includes a mandatory portage around a fish ladder—a good spot for us to have a snack and to reflect on our good luck to be spending the first day of the year on the water. New boat, new year, new river, and a little bit of Columbia Gorge magic with good friends. Winning! Thanks to all involved for helping me get 2012 started off right, and thanks to The West Fork. I’ll definitely be back. Now, if someone could just teach me to ride a horse and speak Spanish... 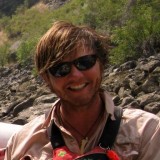 Tate hails from the Southeast and is a trip leader for our Middle Fork of the Salmon trips.