On Monday, President Obama signed the Omnibus Public Lands Management Act of 2009 resulting in stronger protections to 200,000 acres of public land in Oregon and millions more throughout the nation. Oregon legislators, Senator Ron Wyden and Rep. Earl Blumenauer, have worked for years to see this bill become law and both were on hand for the signing ceremony.

Pres. Obama's remarks were peppered with remembrances of the vision of former Pres. Teddy Roosevelt, creator of the U.S. National Park System. "It's a vision that sees America's great wilderness as a place where what was and what is and what will be -- all are the same; a place where memories are lived and relived; a place where Americans both young and young at heart can freely experience the spirit of adventure that has always been at the heart of the rugged character of America."

Here at ECHO we were so inspired by this legislation that we felt like breaking into song: 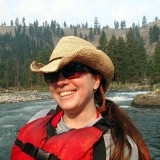