A couple months ago we posted a Video and Interview about the other half of ECHO, Joe Daly. You didn't think we'd forget about Dick, did you? Here's our media team's video about Dick Linford and an interview to get to know him a little better.

What initially attracted you to rafting?

Dick: I grew up in Wyoming and New Mexico and did a lot of outdoor stuff as a kid. When I was at Cal I took up sailing in the San Francisco Bay, and loved it. When I started teaching, my wife Suzie and I did a lot of backpacking and joined the Sierra Club. I read in the Club’s magazine about river trips in the Grand Canyon and thought, "Wow! What a neat thing to do." I called the company mentioned in the article and quickly found that we couldn’t afford a trip, so I talked them into hiring me as a guide on their California trips. About a quarter of a mile into my first training trip I was hooked. I knew my life had changed.

Dick: That is a tough question. Like asking what my favorite food is. I love a lot of food and I love many rivers. But if I have to choose one I’ll go with the Middle Fork of the Salmon in Idaho. 75 to 100 miles of pristine beauty, incredibly clear water, changing and spectacular scenery, hot springs, great fly fishing, and fun but not dangerous rapids. I have been guiding on the Middle Fork for 35 years, and I never get tired of it.

Where and how did you meet Joe Daly?

Dick: Joe and I were high school social science teachers in San Leandro, California, just south of Oakland and we became good friends. My second year of guiding I managed the company’s California operation and convinced Joe he should be a guide.

Dick: By happy accident, really. My recollection is that my brother and sister-in-law fell in love with rafting, and each family decided to buy a raft to run private trips. When Joe heard of the plan he said he wanted one. That was three rafts. We decided to buy two more and run enough commercial trips to pay for our hobby. Each family was to invest $2,000. I didn’t have $2,000 but I had a suburban wagon that the company used. The year was 1972, and rafting was considered only for the most adventurous people.

Our goal that first year was to run at least four commercial trips and close down the first of July to travel through the Pacific Northwest looking for new rivers. We ran 16 trips by July 1. We had a lot of fun but didn’t make any money, so for 1973 we bought five more rafts and a bus. Fortunately we didn’t know what we were doing. Otherwise we might have been intimidated.

What was your craziest rafting experience?

Dick: I was on a Middle Fork trip when a 17-year-old boy disappeared. We went all night without finding him. At one point his mother told me, "Thank God I had 17 wonderful years with him." I tried to convince her that he had to be OK, but I had serious doubts. He turned up the next morning. He had wandered 3 miles downstream and found another camp. That was the longest night I ever spent on a river trip.

Where did the name ECHO: the Wilderness Company come from?

Dick: You’ve heard the saying that a camel is a horse put together by a committee. Our name came from the original three families trying to come up with a company name. The ECHO part was easy, and we probably should have left it at that. But we were naïve and thought we might do other wilderness activities, so we tacked on The Wilderness Company. Way too long and confusing. We got a lot of lettered addressed to The Echo Wilderness Company. My favorite one was addressed to Echo Bewilderness Company. That was certainly us.

How do you spend your time these days?

Dick: I’m doing a lot of writing. A couple years ago Bob Volpert, an outfitter friend, and I published a book of river stories titled Halfway to Halfway and Other River Stories. It has done well enough that we are working on a sequel, to be titled Halfway to Halfway and Back: More River Stories. We avoid stories about scary whitewater and acts of great daring. We like the offbeat, funny and ironic tales of interesting river people, strange happenings, etc. I’m also working on a novel that I don’t expect to be published. It takes place over seven days of a Middle Fork trip, beginning with the pre-trip day when the guests arrive and the guides to put-in. I have no imagination for fiction, but here all I have to do is use things that actually happened on trips.

I also play outside a lot. We live in Bend, Oregon, an outdoor person’s paradise. I bike, hike and boat in the summer and cross-country ski in the winter.

Dick: ECHO has been my job, my business, my family and my love. Can you imagine making a living doing what you love with people you love? A friend once said, "You don’t have a company. You have a large, dysfunctional family." I have to agree that we have not operated as a normal, rational company. Our personal ties have been too close for that. But what a ride. Many of my old guides are my best friends, and they love each other too. Every year there are several gatherings that will attract anywhere from ten to 80 ECHO people. And the children of many guides are now also guiding. The beat goes on. 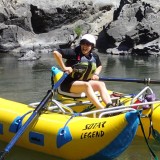